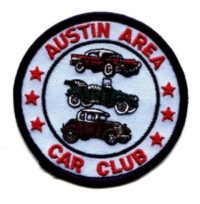 President’s Message:
I try to write articles that are interesting and promote some thoughts that we maybe had never before considered. Memorial Day is this month so most of us think about veterans who are no longer with us. This month’s article is about vehicles with wheels, many wheels. I just finished reading the book “Spearhead” by Adam Makos. It is about a tank crew from the 3rd Armor Division and their life in Germany during WWII.

Before we get to the men and living conditions, here is a description of a WWII M4 tank. Crew was made up of 5 men, the Commander, driver, gunner, loader, and bow gunner. The Sherman tank weighed 33 tons and was powered by a radial engine. The hull was 3.5’’ thick. There were two doors in on top, and an escape door in the bottom of the hull. The gun barrel was 75mm (roughly 3” ) in diameter and about 17 feet long. The shell was nearly 3 feet long and weighed 13.5 to 24.4 pounds. The Pershing tank made its debut mid WWII. Better guns and engine and somewhat bigger but still no modern comforts. The Pershing weighed 46 tons. It carried 600 rounds of machine gun shells, and 46-51 75MM rounds, and 176 gallons of fuel. The crew quarters were very confined and basic. There were 5 seats, no beds, the crew often slept in their seat or took turns laying down on the hull floor. No kitchen or food prep areas, no heat and last but not least no restroom or shower.

Tank crews often went days to weeks and longer without showers. Warm meals were extremely rare and only when the supply truck came to refuel or restock ammo would they get a hot meal. When I think of no heat, in the winters of Germany, 30 degrees and colder, the crews would often report of frostbite and would only get a warm up of the hands and feet from a medic and a blanket and be sent back to their tank. Temperatures some times would be so cold that ice would form on the inside of the crew area. Restrooms??? At certain times the crews would camouflage their tanks to hide from the enemy. During those times, the crews did not leave their tanks, so a spent shell casing, shared by the crew of 5, was their only “restroom” resource.