Thanks go to Gary Smith for his work on this project. 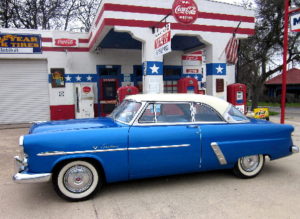 Back in the early years it was a men’s only club and no women were allowed, not even as guests at meetings.

The only cars that qualified for membership were 1915 and older; this was later changed to include cars through 1925.

By the year 1965 cars from 1942 and back were included and this still is the rule for the Horseless Carriage Club (HCCA) of which the AACC is no longer affiliated with.

The AACC is a stand-alone club and is not affiliated with any other club other than the Pate association, which is not really a club but a group of 17 clubs. The AACC came about when a group of members from the HCCA decided to spin off and start their own club in 1988. They didn’t have enough members with pre-war cars to continue as a chapter of the HCCA so they dropped their affiliation with the National HCCA and unofficially changed their name to the AACC.

The AACC was started as a club for any vehicle that is 25 years old or older and remains that way today.

The AACC name didn’t become official until the year 1997 when its name change was registered with the state of Texas as a non-profit tax-exempt corporation.

For many years the AACC was part of a group of clubs that hosted the Tri City tour and the Texas tour. This was discontinued because of lack of interest and participation from the current club membership.

It is interesting to note that to become a member of the club prior to 1997, before the new by-laws were written, you had to be sponsored by two members in good standing, the board of directors had to approve the nomination, and you had to attend at least two business meetings. Then your membership into the club was voted on by the general membership and you became a full member. It could take several months to become a full voting member. Today anyone that wants to pay the membership fee becomes a member immediately.